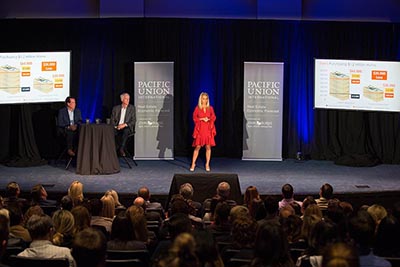 On Nov. 29, Pacific Union held its first annual Los Angeles Real Estate and Economic Forecast in partnership with John Burns Real Estate Consulting in order to project market activity through 2020. Below are some key, high-level takeaways from the live event. To watch the full one-hour presentation, click here.

Normal (up to 10 percent median price growth): While the majority of Los Angeles markets fall into this category, lower single-digit percent median price growth was more evident across South Valley neighborhoods such as Van Nuys, Calabasas, Arcadia, and Sherman Oaks. Higher single-digit percent growth was seen in areas adjacent to central Los Angeles, such as Culver City, Studio City, and Highland Park, but also in more affordable communities on the eastern side of the metro area. Santa Monica, West Hollywood, and Pasadena posted solid 5 percent to 6 percent median price growth. These relatively higher-priced areas saw normalization in appreciation from last year, when median prices increased by 19 percent in Calabasas, 16 percent in Malibu, and 13 percent in West Hollywood. Median homes prices in areas with growth up to 10 percent averaged about $640,000.

Slowing (median price decline to flat): Neighborhoods where prices lost steam over the last year averaged a median price of about $943,000. Many saw strong appreciation in the year prior and have now experienced a pause in buyer enthusiasm, including Westlake Village, Rolling Hills, and El Segundo, where price growth exceeded 20 percent in 2016. On the other hand, San Marino, where Chinese buyers drove demand in 2016, is now seeing a pause due to China’s amended restrictions on capital outflows.